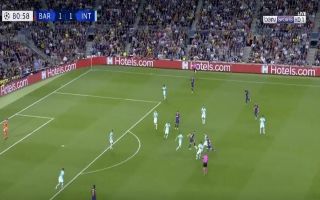 The Spanish champions found themselves a goal down after just two minutes at Camp Nou, when Lautaro Martinez manufactured himself a yard ahead of Gerard Pique before firing past Marc-Andre ter Stegen.

However, Luis Suarez scored a spectacular volley to level the scores in the 58th minute, before adding his second late in the game to secure a valuable three points for Barca in Group F.

Summer signing De Jong also impressed on the night, most notably embarrassing two Inter defenders with an outrageous 360-degree turn after picking the ball up from Lionel Messi.

Check out the Dutchman’s superb skill below, via Twitter.

Bruh that 360 turn by De Jong tho
pic.twitter.com/Qmo5ss3Yh5

Frenkie de Jong is one of the best footballers on the planet today at retaining possession in tight spaces. His ball ability & understanding of using the body to protect it is World Class. Surrounded by 3 Inter Milan players tonight he finds a solution!pic.twitter.com/IICgOEEs4D