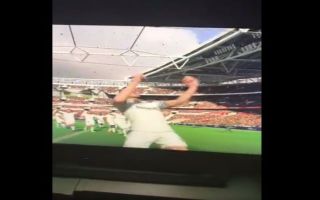 Now before I stick the boot in a bit here, if there ever was a club who could celebrate the achievement of growing and competing over recent seasons, it probably would be Spurs.

The fact remains for all the lovely football and good results, they haven’t actually won anything meaningful for a very long time. This glitch has appeared in the new Fifa 20 game, and it’s led to some people suggesting it’s dedicated to Spurs:

Tottenham fans celebrating all the achievements and trophies, they’ve won in the last decade
(?: @afcevan )pic.twitter.com/TfB5SRtDUS

My son and I just won our first “trophy” in career mode on #FIFA20 but hang on a minute…where’s the EFL trophy? ???? #FixCareerMode @EASPORTSFIFA pic.twitter.com/LlJcarEj4N

The actual glitch itself shouldn’t shock anyone, the game has been released in a half finished state and is an absolute disgrace to actually charge people for it at this stage.

At least the laziness from EA has resulted in this small piece of joy.