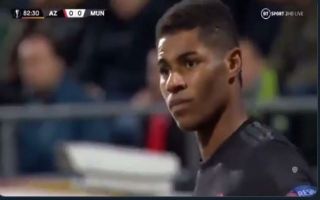 Some players just have a reputation as a great free kick taker. It will often be the case they don’t score many, but they’ve proven they can do magical things with the ball so it builds excitement. Think Roberto Carlos and Cristiano Ronaldo – You know it probably won’t go in but you know what they’re capable of.

Then there are some people who should just back off when a free kick is given. Marcus Rashford is approaching Harry Kane for England status when it comes to someone who needs to let someone else take them.

This latest video against AZ shows the only people in danger from his efforts are the crowd:

Marcus Rashford did it again!! ?pic.twitter.com/a15WQX6Wna

Rashford’s freekick, such great technique from a young lad, too talented to be playing for Manchester united ???#MUFC pic.twitter.com/IO0GtSacl7

He doesn’t even look confident when he steps up to take them. It’s just another thing that isn’t going right for Ole Gunnar Solskjaer and his team this season.