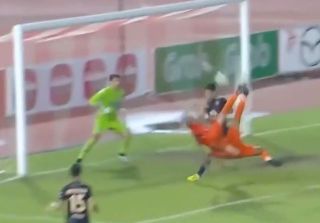 Nakhon Ratchasima were in action against Buriram United in the Thai League this week, and they produced a brilliantly unique goal.

A standard overhead kick goal is a great effort in its own right, but when two players simultaneously produce the same thing, it looks like a work of art.

As seen in the video below, the pair involved were perfectly in sync as they met the cross with an overhead kick that was brilliantly timed by both as they showed great technique.

It’s a moment that neither will forget, although unfortunately for their side, they went on to lose the game 3-2 which would undoubtedly have put a dampener on things.

That aside, we’re perhaps looking at a contender for the Puskas award next year…

Is there anything better than an overhead-kick goal?