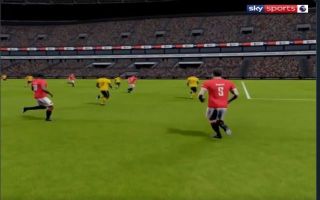 Yes we all know, referees have a tough job and get most of the decisions correct blah blah, but sometimes they absolutely deserve to be criticised when they get something obviously wrong. Especially when something is literally standing right in front of them.

For once, VAR was on hand to actually make sure the right decision was given as Aubameyang’s glorious finish against Man United eventually counted on Monday night.

READ MORE: A look back at most valuable players list suggests Manchester United made some huge transfer mistakes

Sky Sports have a special VR video that shows you the exact view of the linesman, and it makes things look pretty bad from his point of view:

?? Aubameyang goal as seen by the linesman…

It’s even more baffling when you consider they are told to keep their flags down unless absolutely sure because VAR will catch any offside decision.

It’s just yet another example of shocking officiating at the highest level, but unless we see a Graham Poll style error then nothing ever seems to be done about it.