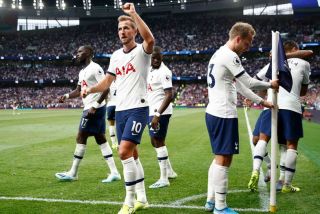 Tottenham face Brighton on Saturday in the early kickoff as Mauricio Pochettino’s side look to bounce back from their heavy defeat in midweek.

Spurs fell to a shock 7-2 loss to Bayern Munich in the Champions League on Tuesday night, and so they will hope to put that behind them and bounce back quickly.

It hasn’t been a particularly convincing start to the campaign from Pochettino’s men, but they still sit in sixth place and know that a win over Brighton could temporarily move them up into third place.

In turn, it would be an ideal way to respond and leave things on a positive note ahead of the international break, and so it’s no surprise that Pochettino has gone with a strong starting line-up to try and get the right result.

There are four changes from the Spurs boss in total from their midweek loss, with Serge Aurier, Danny Rose, Harry Winks and Dele Alli all dropping out of the XI.

Moussa Sissoko looks set to fill in at right-back as Aurier is suspended, while Eric Dier returns to the line-up and will start in midfield.

Harry Kane is supported by Heung-Min Son and Christian Eriksen as well as Erik Lamela, with Alli, Lucas Moura and Winks all having to settle for a place on the bench.

It looks a solid unit from Pochettino, and he’ll hope that they can show that grit and determination needed to perhaps even grind out a win by any means necessary in order to get themselves back on track.