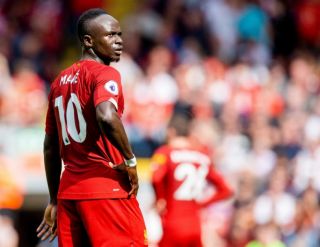 Liverpool host Leicester City at Anfield on Saturday and Sadio Mane will hope to celebrate quite the personal achievement with a win.

The Reds will be looking to extend their perfect start to the Premier League campaign with an eighth consecutive victory, although it certainly won’t be easy against the Foxes.

SEE MORE: ‘Why is he starting?’ – These Liverpool fans react to ‘vile’ lineup for crucial Leicester clash

Brendan Rodgers and his players have impressed so far as they sit in third spot in the standings and just six points adrift of the Merseyside giants, and they’ll be hoping to spring a real surprise and make a statement by securing a positive result this weekend.

In order to do so, one man that they’ll have to keep quiet is Mane, and the 27-year-old will certainly be eager to make a decisive contribution in what is his 100th Premier League appearance for Liverpool.

The Senegal international joined the Reds from Southampton in 2016 and he hasn’t looked back since as he has bagged 66 goals in 133 outings across all competitions.

It’s a testament to him for his consistency that he has managed to bring up 100 appearances in the league, while it’s also a tribute to Jurgen Klopp’s management and ability to get the best out of his star forward week in and week out to ensure that he has no reason to take him out of the side.

It remains to be seen if Mane will be able to celebrate with three points, but he’ll undoubtedly be proud to reach such an impressive milestone that many top players who have worn the Liverpool shirt haven’t managed before him.

As confirmed in the tweet below, Mane does indeed start vs Leicester…