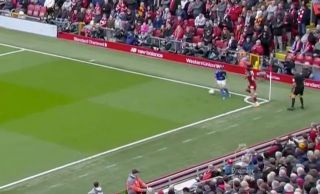 Liverpool were in action against Leicester City on Saturday and Trent Alexander-Arnold was seemingly in the mood to put on a show for the Kop.

The Reds were going for an eighth consecutive win to start the Premier League campaign and continue what has been a relentless run.

However, they had a tough challenge in front of them this weekend with an in-form Leicester City side arriving on Merseyside hoping to build on what has been an excellent start for them too.

The first goal could be crucial in this one, and while James Milner won’t want to watch this chance back again any time soon, Ben Chilwell won’t be too fond of the replays either as he was done all ends up by Alexander-Arnold down the right flank.

As seen in the video below, the Liverpool right-back found himself with little space by the corner flag but showed great composure and skill to nutmeg his fellow England international and get free to deliver a ball into the box.

Unfortunately for him though, Milner couldn’t find a finish to match his quality creativity, as he sent his effort over the bar in front of the Kop as Liverpool missed a great opportunity to take the lead against the Foxes.

Time will tell if they come to rue this miss…

Video: Leeds hit back against Liverpool as Harrison beats Alexander-Arnold and Gomez to score a fine goal September 12, 2020 17:47
Liverpool FC