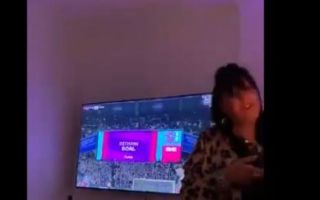 Just when you thought VAR couldn’t get any worse, it’s only gone and ruined this poor woman’s birthday celebrations as her sons looks disgusted as a decision went against West Ham earlier this evening.

It’s one of those moments where you need to try and keep it together and be respectful to the birthday person, but clearly he couldn’t hide the disgust on his face:

When your Mother’s Birthday is ruined by a West Ham VAR decision @WestHam @ExWHUemployee @SkySportsNews ????? pic.twitter.com/iuCALdewrv

We all expected some teething problems with the new system, but ruining birthdays is a step too far.

READ MORE: Further issues with VAR in La Liga as game could be replayed over possible malfunction