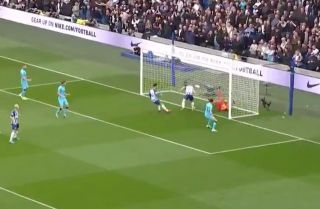 Falling behind to Brighton on Saturday was the last thing that Tottenham needed but that’s exactly what happened at the Amex Stadium.

Spurs would have been hoping to make a positive start after their disappointing and heavy defeat to Bayern Munich in the Champions League on Tuesday night.

However, just minutes into the encounter, Hugo Lloris got himself in a real tangle and made an error when trying to claim a cross as he almost took the ball into his own net.

With the only option left to drop the ball in front of his goal, Neal Maupay was on hand to tap home the opening goal of the game.

Unfortunately though, that wasn’t the biggest talking point of the incident, as sadly Lloris was stretchered off and given oxygen as he appeared to sustain a serious injury to his arm.

Although BT Sport were keen not to show certain angles on the replay, it did appear as though the Frenchman’s arm was bent back in a very awkward way as he hit the ground, and it’s hoped that it isn’t a serious setback for the Tottenham captain.

However, based on the pain that was etched on his face and the reaction of some of his teammates after seeing him collapsed in his goal, it doesn’t look great for the Frenchman and so we wish him a speedy recovery regardless of the extent of the damage.

This is horrible ?? look how he broke his left arm. Get well soon Hugo Lloris pic.twitter.com/WA046jKk4e

It's a nightmare start for Spurs on the South Coast.

An error from Lloris leads to an early Brighton lead. pic.twitter.com/ZjouOmQ58U

Things go from bad to worse for Spurs!