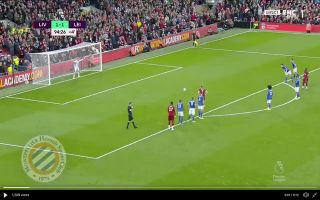 James Milner scored from the penalty spot to seal a dramatic late victory for the Reds against Leicester this afternoon, take a look at his spot-kick below.

In the final minutes of Liverpool’s exciting clash with Leicester this afternoon, veteran midfielder James Milner scored from the penalty spot to seal three points for the Reds.

The Reds were awarded a penalty after Marc Albrighton brought down Sadio Mane with a clumsy challenge.

Milner stepped up confidently and sent Kasper Schmeichel the wrong way to round off a dramatic match.

Take a look at Liverpool’s winner below:

I will name my baby after him. James Milner. pic.twitter.com/7uaQiO340n

Jurgen Klopp’s men really snatched it today. After seeing this late rescue, surely the Merseyside outfit will win the league this season.

Is it finally their year?