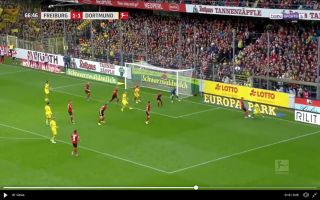 This comes after the ace bagged brace for Lucien Favre’s side in the Champions League during midweek, take a look at Hakimi’s strikes here.

In the 67th minute of today’s clash, England sensation Jadon Sancho picked out the marauding right-back with an inch-perfect pass.

Hakimi showed sensational skill to effortlessly glide past his man before unleashing a shot on goal. The 20-year-old’s effort was deflected into the back of the net.

Take a look at the Moroccan international’s superb goal below:

Hakimi is in fine form for BVB, Zinedine Zidane should be keeping a close eye on Madrid’s academy graduate.

He looks like he could be the long-term successor to star Dani Carvajal.