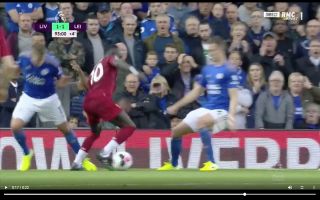 Some football fans have taken to social media to claim that Liverpool star Sadio Mane dived to get the crucial penalty that sealed a win for the Reds vs Leicester.

In the final minute of this afternoon’s exciting Premier League clash between Liverpool and Leicester, Jurgen Klopp’s side were awarded a penalty after Marc Albrighton brought down Sadio Mane from behind.

Midfield general James Milner reiterated his ice-cold ability from the spot by sending Kasper Schmeichel the wrong way with a perfectly composed penalty.

Tensions were certainly high at full-time, Foxes star Ayoze Perez seemed to challenge the entire Liverpool team to a fight for a reason that hasn’t been revealed yet.

Some football fans have taken to social media to blast the decision to award Liverpool a penalty.

Take a look at the incident leading to the penalty below:

Disgusting dive. Huge Mane fan, but this is a "clear and obvious" error from the official. It then goes to VAR but isn't overturned. Flawed system and I suspect there will be many changes to it next season. pic.twitter.com/8YYyZVTpYC

@FA This is getting ridiculous now, that is a clear dive by Mane (after realising he has lost the ball and having a touch) he throws himself to the floor! Blatant cheating, what is the point of VAR? pic.twitter.com/Ck01YTOgKm

Lol, unbelievable dive. Well, I say unbelievable but it's very believable from Mané. They had VAR too. Everyone involved in this decision should be forced to retire from refereeing. pic.twitter.com/SS0lRZnlzv

Check out some reaction from these sceptical fans to the incident below:

That was a blatant dive by Mane. Shocking how anyone would give that in the closing stages of a keenly contested game.

Actually in fairness to Liverpool Iv just seen the mane dive for the penalty from a different and its not as bad as first thought.

Can’t get over that Dive from Mane!!!! Referees need to be punished. They have technology now to help them, use the bloody screen on the side of the pitch!!!#VAR

Great dive from Mane in the last minute, had to take over the reaponsibilities after Salah had gone off ?????

The luck’s definitely with Liverpool right now, however after looking at several replays it doesn’t seem as though Mane dived for the Reds.

Albrighton’s challenge was quite clumsy and reckless, this may just be a way for rivals fans to hit out at the high-flying Reds.