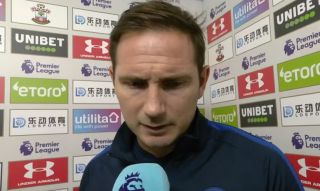 The Brazilian winger has not always been every Chelsea fan’s cup of tea but is going through a fine run of form at the moment and becoming a key player in this otherwise youthful side.

Lampard spoke after the game about the youngsters who continue to impress as Tammy Abraham and Mason Mount both scored in the win at St Mary’s, while Christian Pulisic also came off the bench and contributed a superb assist.

However, in his interview with BBC Sport he was particularly keen to single out Willian as he praised the 31-year-old for becoming a real leader in his squad.

“The one I want to talk about is Willian,” he said.

“I thought he was absolutely immense. It’s really easy to cast your eye towards the young lads, but the example of what Willian’s doing on the ball, off the ball the running, the energy, the speed, the quality…

“He’s a leader. Not a leader that shouts and bawls around but he’s a leader in the way he’s performing at the minute.”

CFC fans will no doubt be excited about the youth coming through at Stamford Bridge right now, but also thrilled to see young manager Lampard having such a good effect on seasoned professions like Willian.

Others such as Jorginho and Mateo Kovacic also look better than last season and the club now looks in much better shape than they did after the first few games of the season.