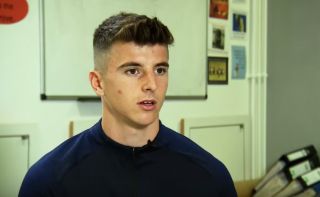 Chelsea starlet Mason Mount has singled out Jorginho for praise as he believes he’s been a key figure in helping him settle in the first-team.

The 20-year-old has become a regular for the Blues under Frank Lampard this season and fans will no doubt be delighted with his progress.

On top of that, they’ll also be thrilled to hear that Jorginho is such an influential figure in the first-team after a bit of a slow start to life at Stamford Bridge.

Despite the Italy international not always looking ideally suited to Chelsea in his first season, it seems he’s now really stepping up and becoming a leader at the club.

Speaking to Sky Sports in the video above, Mount was full of praise for Jorginho, saying: “When you’re coming into a team and playing with someone like Jorginho, how much of a character he is and how big he is within the team, he’s had a massive effect on me.

“I think playing with him, being around him, training with him every day, he’s a massive player for us and you learn so much off a player with that experience of playing at a very, very high level.”