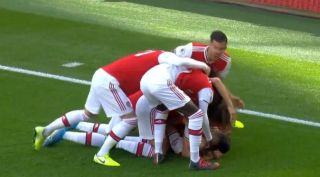 David Luiz has his first goal in an Arsenal shirt as he headed in a Nicolas Pepe corner to make it 1-0 against Bournemouth in this afternoon’s Premier League clash.

The Brazilian hasn’t made the most convincing start to his Gunners career so far, but has made up for it with an important strike to get them off to a good start today.

Luiz did well to get to Pepe’s cross and guide the ball into the back of the net, and Arsenal will hope this can be the first of many today.

Unai Emery’s side have looked strong in recent games and this early Luiz goal gives them a good platform to build on in this game.

Arsenal are in front! ?

And it's David Luiz who provides the goods with his first goal for the club!#PL pic.twitter.com/CkZJrbdmr6