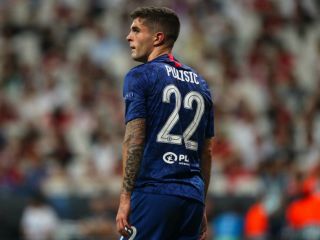 Chelsea manager Frank Lampard has urged Christian Pulisic to work hard and prove that he deserves a place in the Blues’ squad.

The 21-year-old established himself as one of the most talented young footballers thanks to his performances at Borussia Dortmund. This propelled Chelsea to sign him in January for €64 million as claimed by Dortmund’s official website.

Pulisic featured in all of the Blues’ matches during August but barring the club’s EFL Cup match against Grimsby Town, the United States international hasn’t been involved in any of their matches following last month’s international break.

Lampard has said that the 21-year-old will have to prove that he deserves to be in the playing XI by working. Speaking to Chelsea’s official website, the club’s manager said: “I spoke to him and was very clear about the standards. We have to give him the fact he’s moved country and moved leagues. He’s just turned 21 so I think, if anyone is getting too excited about this, they should calm down. What he needs to do is work to show within the group that he deserves to play. That’s what the focus on everyone is.”

Chelsea currently have a number of options in the winger department. There are young talents like Mason Mount and Callum Hudson-Odoi along with experienced players like Pedro and Willian. Hence, it won’t be easy for Pulisic to become a regular at Chelsea. However, there are still many matches to go this season and Lampard is bound to give the 21-year-old some game time.