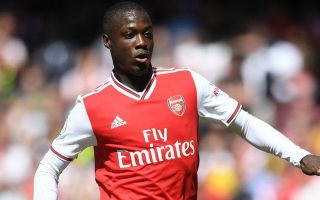 We don’t see enough attempts from British players to try become known just by their first names. The only real example is Jay Bothroyd being known simply as “Jay” in Japan, but that’s more because his surname is a nightmare for them to pronounce.

There seems to have been a slight mistake on the Sky Sports graphic showing a new name in the Arsenal starting XI, and it’s certainly got people talking on Twitter.

It almost looks like some of these fans would prefer “Pete” over big money signing Nicolas Pepe:

arsenal’s record signing is dropped for a man called ‘pete’ but they still think he’s the second coming of henry pic.twitter.com/0187besuw5

The Ivorian hasn’t shown his best form since arriving from Lille this Summer, The BBC reported that he was signed for a club record fee of £72m, so expectations were certainly high.

He’s only managed one goal in the Premier League so far and was particularly poor against Man United last Monday. He does get into some decent positions but seems to lack an end product. Fans may be worried that he turns out to be the second coming of Gervinho who didn’t live up to expectations.

Hopefully he can find a way to oust this Pete character from the team and show what he can do.