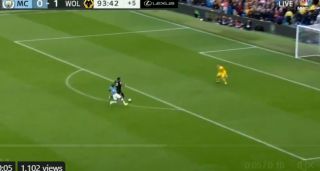 Adama Traore is a popular man with Liverpool fans right now after his heroics for Wolves against Manchester City today.

Remarkably, the winger scored two late goals for Wolves to deliver a memorable 2-0 win at the Etihad Stadium.

MORE: Video: Adama Traore becomes Liverpool hero with goal to stun Man City and put Wolves 1-0 up at the Etihad

You can watch his second goal below as Traore finishes well to secure a big win for this impressive Wolves side.

More importantly, however, the defeat for City has huge implications for this season’s Premier League title race, as it puts Liverpool firmly in control with an eight-point lead.

The Reds will now surely be big favourites to go on and win the league, though they did let a similar lead go last season as they finished second, just a point behind reigning champions City.

Still, Pep Guardiola’s side have made a very poor start to this campaign by their high standards, and seem to be missing the likes of Vincent Kompany and Aymeric Laporte at the back, with the Belgian leaving in the summer and the Frenchman injured.

There’s a long way to go, but some Liverpool fans are loving this and calling for Traore to get a statue at Anfield!

ADAMA TRAORE BUILD A FUCKING STATUE OUTSIDE OF ANFIELD

Adama Traore making a strong case for a statue on Merseyside after Divock Origi.