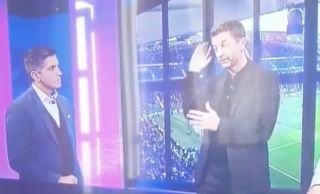 The French shot-stopper suffered a nasty fall early on in the defeat to Brighton and had to go off with an arm injury.

Sherwood, however, made light of this bad injury by admitting Lloris would hold his arms up – if he could – over the mistake that led to Brighton’s opening goal.

While it’s all too common for some people to get easily offended on social media these days, this joke does come across quite badly considering Lloris could be quite badly injured after the Brighton game and would represent a big miss for his former club.