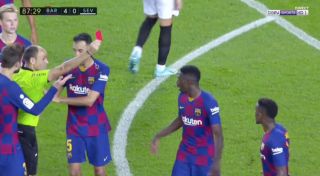 Barcelona were reduced to nine men in the latter stages of their match against Sevilla tonight, after Araujo and Dembele were both shown red cards.

With Hernandez through on goal, Araujo seemed to make a fair, shoulder-to-shoulder challenge on the Mexican, however the referee deemed it a foul, sending the youngster off on his Barcelona debut.

Due to the controversy of this decision, winger Dembele then seemed to vent his frustration at the referee, with the Frenchman then being shown a second yellow for what seems like dissent.

A messy end to a great game from the Blaugrana!