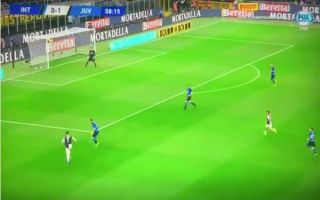 Cristiano Ronaldo really does like to save it for the big occasions. Admittedly this didn’t actually result in a goal, but the run and shot is just fantastic.

He picks the ball up on the touchline, goes on a long dribble and his shot from distance is only stopped by the cross bar.

The defence and keeper look completely beaten, unfortunately the shot was inches away from perfection:

? And Ronaldo hits the bar!

? Juventus have Inter on the ropes early on! pic.twitter.com/4Yww1zLsfC

Cristiano Ronaldo. So close, what a run. pic.twitter.com/0vQoR8JSgQ

It was so nearly another magical moment from the great man, don’t count against him still having a big say in this game.