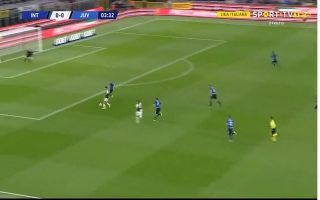 Paulo Dybala is unfortunate that he always seems to be overshadowed despite being an incredible player himself. For Juventus he’s dwarfed by Cristiano Ronaldo and he has Messi to contend with at international level.

He’s shown his world class ability tonight with a fantastic early goal for Juventus at the San Siro as they take on Inter Milan. He has to hit the ball perfectly to get it past the keeper, and he get’s an incredible connection on the ball:

? WHAT A FINISH FROM DYBALA!

PAULO DYBALA SILENCES THE SAN SIRO! WHAT A GOAL!pic.twitter.com/d437ORelLm

Antonio Conte has really turned Inter around this joining in the Summer, but his team are up against it to get anything out of this game tonight.