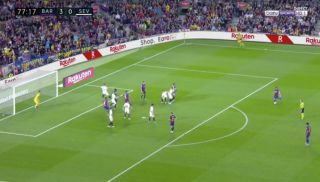 Lionel Messi bagged his first of the season this evening, as he scored a superb free-kick to give Barcelona a 4-0 lead against Sevilla at the Nou Camp.

Having been 3-0 up thanks to strikes from Suarez, Dembele and Vidal, the home side made it four in the second half thanks to their Argentine talisman.

Lionel Messi has now scored 15 free-kicks in LaLiga since the start of the 2016/17 season, at least *nine* more than any other player in the division.

A master of the art.

After Sevilla gave a free-kick away for handball, Messi stepped up to it, slotting it straight into the top corner to score his first of the 2019/20 campaign.

The GOAT back to doing what he does best…