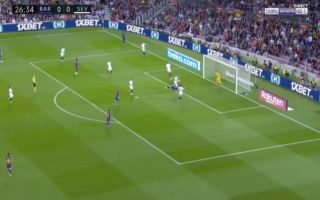 Luis Suarez scored his fourth league goal of the season tonight, as the Barcelona forward bagged a fine overhead kick to give his side a 1-0 lead against Sevilla at the Nou Camp.

With the scores tied at 0-0, Suarez decided that enough was enough, as he met a cross from Nelson Semedo before firing a truly sensational overhead kick attempt into the back of the net.

on ya bike suarez pic.twitter.com/2Gq7MrgpCN

It was a truly brilliant strike from the Uruguayan, who’s added to his repertoire of acrobatic goals following his fine volley against Inter Milan on Wednesday.

Photo: Eric Dier awards his Man of the Match award to the toilet after disaster almost struck against Chelsea
More Stories Luis Suarez