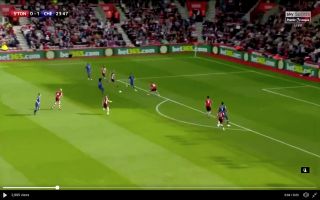 Chelsea’s free-flowing attacking football was on show when Mason Mount scored after a lovely team move by the Blues against Southampton this afternoon.

Mason Mount made it 2-0 to the Blues in the 24th minute of this afternoon’s clash with Southampton, the 20-year-old produced a wonderful finish after a lovely team move.

Check out the starlet’s goal below:

Abraham, Willian and Jorginho combine brilliantly before Willian plays Mason Mount through on goal and he simply smashes past Angus Gunn!

Chelsea’s youngsters are flying right now, there’s no doubt that Mount and teammate Tammy Abraham are two of the best young players in the world right now.