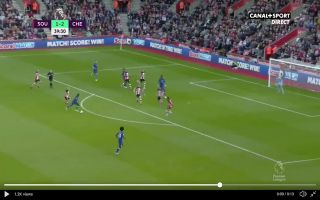 Chelsea look unstoppable in attack against Southampton this afternoon, the Blues made it 3-1 after N’Golo Kante’s stunning long-range strike flew into the net.

Chelsea extended their lead over the Saints’ to 3-1 in the 40th minute of this afternoon’s Premier League clash.

Marcos Alonso picked out N’Golo Kante with a pinpoint pass and the tireless midfielder carried the ball forward before teeing up a spectacular long-range strike.

The superstar’s strike deflected off of Pierre-Emile Hojbjerg and flew into the back of the net. The goalkeeper had no chance of stopping this.

Check out the Frenchman’s strike below:

The Blues’ attack is just too much for Southampton to handle, this kind of free-flowing attacking performance will excite Chelsea fans.