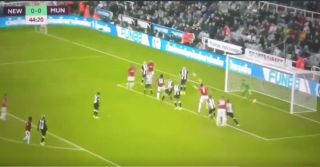 Harry Maguire blew a glorious chance to give Man United the lead against Newcastle this afternoon, as the Red Devils went into half time against the Magpies with the scoreline stuck as 0-0.

In a game where chances are few and far between, summer signing Maguire blew a superb chance to give the Red Devils a 1-0 lead towards the end of the second half.

Maguire’s miss ?, should be 1-0 United.
That said, he has been class defensively. ? #MUFC #NEWMUN pic.twitter.com/5o8CNYeeKO

After a corner was whipped in, it seemed easier to miss for Maguire, however he somehow steered his header wide as the scoreline remained goalless.

Following this, a number of fans took to Twitter to blast Maguire for his shocker of a miss against Steve Bruce’s side.

Given how easy it seemed to score, we don’t really blame them…

Maguire should of scored tho , shocking miss ?

What’s going on Maguire lad? What a miss that was at the end of the 1st half

That’s an unforgivable miss by Maguire

Maguire really missed a free header from 5 yards out you know ?

Should be winning, that Maguire chance was harder to miss than score!