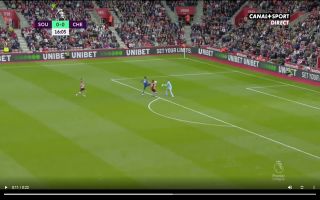 Chelsea have taken the lead against Southampton after Callum Hudson-Odoi’s spectacular pass led to an insane lob from talisman Tammy Abraham.

In the 17th minute of Chelsea’s Premier League clash with Southampton, the Blues took the led after wonderkid Callum Hudson-Odoi played a magnificent pass over the top of the Saints’ defence.

Tammy Abraham charged ahead of Maya Yoshida before beating Southampton’s goalkeeper to the ball with a lovely lob, the ball looped over into the air and into the back of the net.

Check out Chelsea’s opener below:

Another one for Tammy Abraham! ?

Yoshida looks to have cleared his effort off the line but the referee looks at his watch and blows for a Chelsea goal!

Abraham is in fine form now, the 22-year-old is a serious contender for the Premier League’s Golden Boot and I for one can’t wait to see him in action for England over the international break.