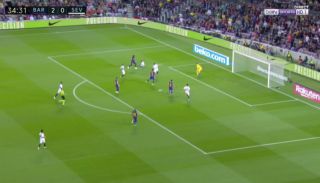 Arturo Vidal and Ousmane Dembele were on hand to score two goals in quick succession for Barcelona this evening, as the Blaugrana put Sevilla to the sword at the Nou Camp.

Having gone 1-0 up via Suarez just minutes earlier, Vidal met a fine pass from Arthur to slide home, giving the home side a 2-0 lead in the process.

What a magical help from Arthur, what a fantastic player, Vidal completed the play well, but nothing so beautiful when this pass from Arthurpic.twitter.com/6nMZ47jnLi

Barca then made it three just moments later, after Dembele ran through on goal, shifting the ball onto his right before firing home with ease.

Barcelona turning on the style against Sevilla tonight!