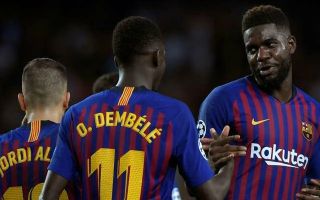 Perhaps it’s sometimes satisfying for a player to get their frustration out on a referee, the red card will see them miss a few games but it might feel worth it. That certainly can’t be the case if it leads to you missing the biggest game of the season so far.

Particularly in the case of Ousmane Dembele, he appears to be on the fringes of the first team but a great performance versus Sevilla suggested he was ready to become a regular starter.

That won’t be the case after he was sent off and will probably miss the game against Real Madrid. A story in Sport has suggested that Barca have launched a desperate appeal which would see the Frenchman be available for the huge game, but it appears incredibly likely to fail.

They go on to suggest that Dembele could even face a lengthier ban because his offence includes contempt towards a referee. However much it might have been justified, the Spanish authorities have to be seen to protect their officials in this kind of matter.

Dembele looks unlikely to be available to play against Real Madrid

It might not have a huge effect on Barca if Suarez, Messi and Griezmann are fit. Those three would always play over Dembele, but he would still be an incredibly useful option to have from the bench if things aren’t going their way.

Judging by the reaction in the Spanish press, the appeal sees to be a desperate attempt to overturn a decision that seems destined to fail. It might be best for them to plan for Madrid without Dembele.