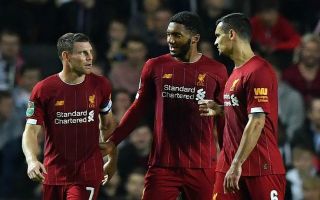 Liverpool star James Milner has been talked up as a surprise potential player of the year winner by pundit Garth Crooks.

The veteran Reds midfielder scored a crucial late goal in the 2-1 win over Leicester City over the weekend, and also beautifully set up Sadio Mane’s opener with a superb through-ball.

Milner’s performance earned him a place in Crooks’ Premier League team of the week, and also got him some extremely high praise from the former Tottenham man.

Writing on BBC Sport, Crooks said that if Milner can continue to play a key role for Liverpool this season and they do go on to win the Premier League title, Milner would seriously deserve to be in contention for player of the year.

“James Milner is back: back in the Liverpool team and back among the goals. The ball from Milner for Sadio Mane to slot home was just glorious,” Crooks said.

“However the pressure to score a 95th-minute penalty when your team have under-performed, and knowing a victory keeps your unbeaten run alive, must have been excruciating.

“It is Milner’s coolness under extreme pressure that is so impressive and should Liverpool lift the title, he is a player that can seriously be considered for the Footballer of the Year award, if only for his service to the game. Or should that be an OBE?”

It’s fair to say the likes of Virgil van Dijk and Sadio Mane are probably far more likely LFC players to pick up that prize, but Manchester United legend Ryan Giggs arguably won the award in a similar way in 2008/09.