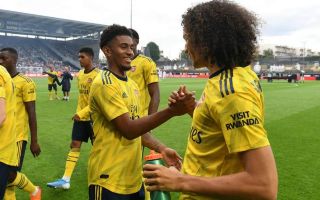 Arsenal youngster Matteo Guendouzi has sent a special message to manager Unai Emery as he praised the Gunners boss for launching his career.

The French starlet has been one of Emery’s biggest success stories so far at the Emirates Stadium in what has perhaps overall not been the most convincing start for the Spanish tactician.

MORE: Arsenal ace faces international dilemma as Italy urge him to reject country of birth after great start to the season

Guendouzi, however, has come on leaps and bounds to become a key player in the Arsenal first-team, and it seems little surprise to see the midfielder is a big fan of the former Sevilla and Paris Saint-Germain boss.

The 20-year-old already has 56 appearances under his belt for Arsenal and clearly seems to have developed well since being signed by the north London giants last summer.

Discussing his progress at AFC, Guendouzi paid special tribute to Emery and vowed to repay his faith in him in a message that will surely encourage Gooners that this manager is one worth sticking with for a while longer.

“We communicate a lot in training, in games on what I can bring on the pitch or in my personal life,” Guendouzi explained to Foot Mercato in the video above, as translated by Sport Witness.

“He’s someone who’s taught me a lot on and off the pitch. I know he trusts me a lot because I’ve started all the games in the Premier League since the start of the season.

“It’s then up to me to stay myself, play well and repay that trust. He’s the one who gave me the opportunity at the highest level. I already played a lot last year.

“He gives me a lot of confidence and he’s the one who makes me feel good on the pitch. There’s also my teammates, who are a big part of that, but he’s really, really made me progress since I arrived at Arsenal.”