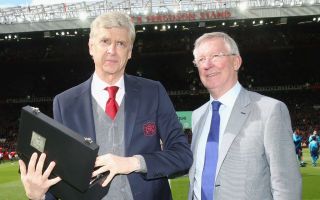 The Frenchman enjoyed a special evening in his honour to recognise his great career in the Premier League with Arsenal, where for many years he had a fierce rivalry with Ferguson.

Sir Alex Ferguson’s tribute to Arsène Wenger in London tonight testament to how their relationship evolved. What a rivalry that was. (Video via Legends of Football in support of Nordoff Robbins) @LoFootball #afc #mufc pic.twitter.com/3f38M1QfWI

The pair clearly have tremendous respect for each other, however, having calmed their feud towards the end of their careers, and Ferguson admits in the video above that he enjoyed competing against Wenger.

He said: “The career you had as a manager at Arsenal was absolutely fantastic – an absolute legend.

“I loved the competition against you. We had some great times and it’s wonderful you’re getting this award tonight. So good luck, my blessing with you.”