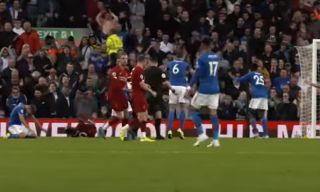 As you can see in the video below at around 10:12, as soon as the penalty is given, Henderson quickly picks the ball up and hands it to Milner to take the spot kick.

Milner seemed the obvious choice for Liverpool given that Mohamed Salah was off the pitch, though one can also easily imagine that Sadio Mane might have wanted it after his foul led to the decision, while Divock Origi might also have been an option.

LFC, however, showed good decisiveness here in the way that Manchester United didn’t recently when there was a dispute about whether it should be Paul Pogba or Marcus Rashford taking the penalty against Wolves.