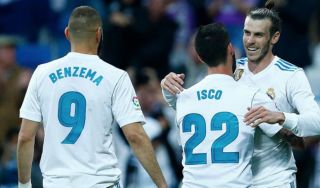 Real Madrid forward Karim Benzema has reportedly penned an extension to his current contract with the Spanish giants, one that’ll see him remain with the club until 2022.

As per El Chiringuito on Twitter, the Frenchman has already agreed a new contract with Los Blancos, one that’s set to see him take home around €11m-a-year, which equates to roughly €211,000-a-week.

It’s also stated that his new and improved deal will mean Benzema will stay at the club until 2022, something that suggests he’s firmly in Zidane’s first team plans.

Benzema has been brilliant so far this year, with the former Lyon man being able to boast about being the joint-top scorer in La Liga in 2019, alongside Lionel Messi, with 21 goals.

MARCA: Out of Karim Benzema’s 6 goals in LaLiga this season, 5 have given Real Madrid the 1-0 lead. Karim has 21 league goals in 2019, the same as Messi and only two behind Lewandowski (23). ? pic.twitter.com/xsETpetM6O

Given this, it seems like Benzema’s new contract is definitely deserved, as he seems to have reignited his career at the Santiago Bernabeu following a rough past couple of years.

During the 2016/17 and 2017/18 seasons, the French international scored just 16 goals in 61 La Liga appearances, a run that saw lot of people, including myself, stating that the forward was finished.

However, it seems like Benzema is firmly putting all of his doubters in their places with this recent form.

Since the start of last season, the 31-year-old has scored 36 times and assisted 13 times in all competitions, an impressive record when you consider how poor Real have been going forward during that time frame.

It’ll be interesting to see if Benzema can keep this run of form going until the end of the season, something that’ll definitely see him up there in the race to win the Pichichi in May.