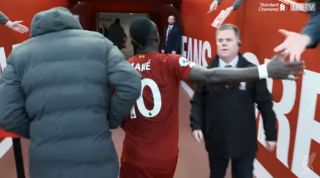 The violence continued after full time as Liverpool beat Leicester City at Anfield on Saturday afternoon.

Following a clash between Ayoze Perez and Andrew Robertson, which led to other players getting involved too as shown below in the video from Sky Sports, Sadio Mane accidentally whacked a steward in the face.

Perez is NOT happy! ?

Liverpool extended their Premier League winning run to 1?7? matches with an eventful 2-1 win over Leicester today, including a last-minute penalty from James Milner! ?

Watch the clip below from around 11:12 as Mane accidentally hits a member of staff as he goes for some high fives with Reds fans in the stands.

Unlike the incident on the pitch, this was clearly accidental, but it truly shows that no one was safe at Anfield this weekend!