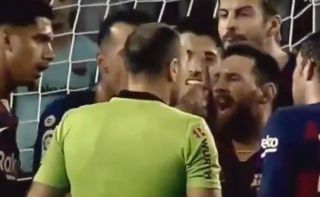 Barcelona secured a 4-0 win over Sevilla this past weekend as they produced a top performance ahead of the international break to make it four straight wins across all competitions.

However, the night was soured slightly by two late red cards with Ronald Araujo and Ousmane Dembele receiving their marching orders from the referee.

The latter was sent off despite the best efforts of his teammate Lionel Messi too, as footage has emerged of the Barcelona talisman defending the Frenchman in a conversation with referee Mateu Lahoz.

As noted by Mundo Deportivo, and as seen in the video below, Messi is seemingly trying to suggest that Dembele’s Spanish isn’t great, and that a red card was perhaps harsh as his point must have been lost in translation with his dismissal due to dissent.

It’s added in the report above that coach Ernesto Valverde made a similar excuse after the game by suggesting Dembele’s language skills aren’t great when it comes to speaking Spanish, and so it remains to be seen whether or not that is an argument used in their defence to try and get the dismissal overturned.

Fortunately for them, it didn’t cost them on the night, but with El Clasico fast approaching on October 26, they’ll hope that they aren’t without Dembele for that crucial showdown with rivals Real Madrid due to suspension.