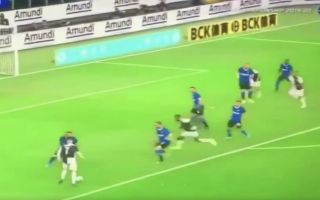 Juventus superstar Cristiano Ronaldo made little progress when trying to show off his dribbling ability in close quarters against Inter.

The two teams met at San Siro in a huge Serie A clash on Sunday, which ultimately ended 2-1 in Juve’s favour after a tense 90 minutes of action.

Substitute Gonzalo Higuain netted a late winner to ensure Juve stormed back to the top of the Serie A table ahead of the international break.

Ronaldo hit the bar in the first half and was clearly desperate to get himself on the scoresheet, but his embarrassing showboating on the edge of Inter’s box at one point suggested he was trying a bit too hard.

The Portuguese forward produced a couple of feints and Cruyff turns but ended up being pushed back outside the box, before eventually executing a neat no-look pass to Miralem Pjanic.

Check out Ronaldo trying to trick the Inter defenders below.

Messi vs Inter: completes 10 of 11 dribbles