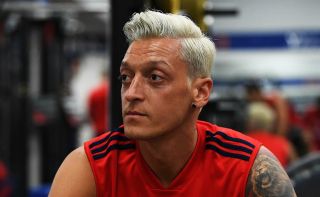 Arsenal star Mesut Ozil is reportedly convinced he’s played his final game for the club after struggling to break into the squad under Unai Emery.

Ozil was frozen out of Emery’s first-team plans on occasion last season, and he seems to be out of the picture even more this term.

According to the Daily Mirror, the German playmaker now fears his time is up at the Emirates Stadium after over six years in north London.

The report suggests Ozil is aware he’s failed to win over Emery since the Spaniard replaced Arsene Wenger as manager, and that he doesn’t fit in with the team’s style of play anymore.

Mesut Ozil could be set to leave Arsenal

Many Gooners would surely be sad to see the former Real Madrid man go, though they would surely also accept he hasn’t ever really fulfilled his potential in his time in England.

Ozil is linked with a possible loan move to Fenerbahce by Takvim, so it may be that discussions over his departure from Arsenal are already underway.