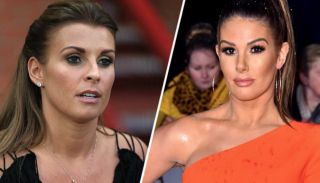 Football fans everywhere stormed onto Twitter this morning to get a piece of the Coleen Rooney and Rebekah Vardy drama.

Earlier this morning, Mrs Rooney posted a tweet accusing Mrs Vardy of leaking parts of her personal life to the Sun, who have been running a number of exclusives on her over the past few months or so.

Coleen stated in the tweet that she underwent an five-month-long investigation into the matter, with the end results showing that it was Vardy’s wife, Rebekah, who was leaking stories to the newspaper.

Mrs Vardy has since come out and denied this on her own personal Twitter account, however seeing as the Sun have recently deleted an article that Coleen talks about in her tweet, it seems as if the Leicester player’s wife could very well be guilty.

Following this accusation from Mrs Rooney, fans everywhere took to Twitter to laud her for her brilliant detective work on the matter.

If this is anything to go off, Mrs Rooney may as well be in the running for a job at MI5!

Rebekah Vardy going through Coleen Rooney’s Private Instagram to pick out stories to sell to The Sun pic.twitter.com/eqTr4IgEGo

Can you now investigate the best way of removing Boris Johnson from office. Ta x

Investigative Journalism at its finest…

Just here to compliment you on your mastery of three-act structure?

This is what football is all about

Amazing work from Coleen Rooney and if the FA have any sense they'll rig the draw to give us Leicester v Derby in the FA Cup third round ? https://t.co/5DZIbGMyNT

Great detective work by Coleen to figure out who it was. Good job!

@ColeenRoo has absolutely ruined @RebekahVardy who’s been caught red handed Selling Stories to the horrible Rag the Sun about Coleen and Family?Good on you Coleen well played??Coleen For New 007 That’s some serious detective work?#ChatShitGetBangedVardy #ColeenRooney??