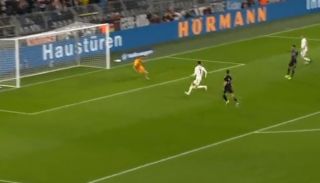 Kai Havertz has scored his first goal for Germany tonight as they lead Argentina 2-0 in their international friendly match.

The 20-year-old midfielder did well to break into the box for a simple tap-in to double Germany’s lead after the opening goal from Serge Gnabry.

Havertz is a huge talent and has been linked with both Manchester United and Liverpool by the Daily Express in recent times.

It would be great to see the Bayer Leverkusen youngster in the Premier League soon and Man Utd look in particular need of a signing of that quality after their poor start to the season.

Perhaps the German connection with Reds boss Jurgen Klopp could swing things in Liverpool’s favour, however, and there’s no doubt Havertz looks an ideal fit for their style of play.