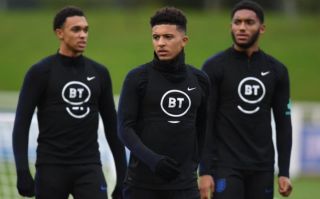 Loads of Liverpool fans are getting excited about a tweet by Borussia Dortmund regarding exciting young winger Jadon Sancho.

See below as the Bundesliga side have tweeted an image of Sancho in England training alongside Liverpool duo Trent Alexander-Arnold and Joe Gomez.

On top of that Dortmund used a caption that has got Liverpool fans convinced they are hinting at a future transfer.

The future is now ??? pic.twitter.com/s30zfOIMx5

BVB tweeted: “The future is now”, perhaps hinting that Sancho’s future lies alongside these England team-mates at Anfield.

Sancho would certainly be a superb signing for Jurgen Klopp side, and has been linked with other big names in recent times.

No wonder this lot are hoping this is a hint…

Even the admin knows he’s coming to Liverpool, you love to see it

Omg bvb what are doing pic.twitter.com/0RjdxZjy1G

This has to be bait.
Ok, I accept Sancho to Liverpool now.