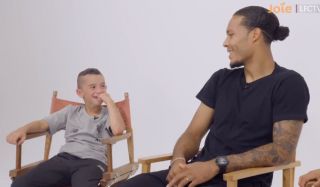 Watch below as the Dutchman answers several questions from kids in this video clip from the official Liverpool Twitter account.

Is VVD scared of anything? Who is the most famous person in his phone? ? @VirgilvDijk gets grilled by 8 year-olds ?

He's only a kid Virgil!! ? ? pic.twitter.com/glhgNOyLQP

About midway through, one kid asks how Van Dijk felt when he won the Champions League with the Reds last season.

The defender responds that he was very happy, but asks the other kid next to him how he felt, only to learn he’s an Everton fan and didn’t enjoy it.

Van Dijk then seems to relish the opportunity to mock his team, joking that it’s tough being an Everton supporter!