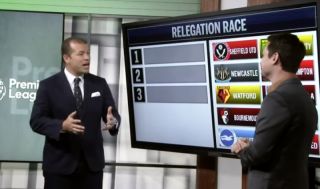 Manchester United are one of the Premier League teams in a relegation battle this season, according to an ESPN pundit.

Watch the video below as Alejandro Moreno picks his three teams set for the drop this term, with Man Utd in the mix as one of the names who look to be at least facing a fight to stay in the division.

Moreno eventually decides that it’ll be Newcastle, Norwich City and Watford going down come the end of the campaign, but he admits every team discussed is in a battle to stay up, based on what he’s seen so far this season.

This is truly damning stuff for United, who are so used to winning major honours and competing at the top of the table, whereas they haven’t been relegated since all the way back in 1974.

While MUFC seem certain to recover at least enough to stay up, it’s a sign of how far they’ve fallen that they’re even being seriously talked about in this way.