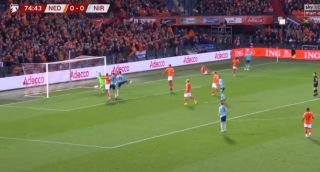 Virgil van Dijk and Matthijs de Ligt are widely regarded as two of the very finest centre-backs in world football right now, but they didn’t do too well on this goal for Northern Ireland tonight.

Watch below as Josh Magennis gives the visitors a shock lead in Holland tonight, with De Ligt bullied off the ball in the build-up and Van Dijk nowhere near the forward as he heads home.

Northern Ireland are 10 minutes away from beating Netherlands away ?#Euro2020pic.twitter.com/FIakgrIOEk

Memphis Depay equalised for the Netherlands shortly after this goal, but the defending by such a top team is surprisingly poor.

Liverpool fans will certainly hope Van Dijk can do better than this once he’s back at his club after the international break.