Rebekah Vardy was in the headlines on Wednesday as she was accused by Coleen Rooney of selling stories to the papers about her.

As seen in her tweet below, Rooney revealed that she had plotted a way to find out who was behind the stories being leaked to the tabloids from her private Instagram account.

Eventually, she rooted out the culprit and alleged that it was Vardy, something that she denies having any knowledge of.

While it remains to be seen if she can prove her innocence, it hasn’t stopped her from receiving a backlash, particularly online, although she was forced to respond on Thursday after claims made by ex-WAG Danielle Lloyd on This Morning.

As seen in Vardy’s response below, she denied that anything similar had happened with Lloyd in the past and aimed a jibe at her too, although it isn’t exactly clear what she meant by it.

Ultimately, she’d probably be well advised to deal with one issue at a time and perhaps the priority will be to prove that she wasn’t behind Rooney’s accusations, and the allegations against her are false. Time will tell whether or not that’s the case or if she will now have a real fight on her hands to repair the damage done to her reputation.

Danielle Lloyd making false claims on @thismorning that we have had ‘similar run-ins’ is utter bollocks. She is just fuming that I ‘didn’t get Jamie recruiting’ for her like she asked me to…

@RebekahVardy do you mean like how the sun recruited you Luv! #secretwag we are all entitled to our opinions and we all know it came from your account ????? attacking me won’t take that away another low blow by you #notagirlsgirl 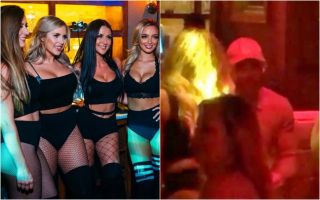