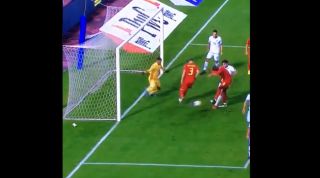 Romelu Lukaku may have been in fine form for Belgium tonight, but he still provided us with one comedy moment with this awful miss.

Watch below as the former Manchester United striker somehow scuffed his effort wide despite it looking easier to score as the ball fell to him inside the six-yard box.

Lukaku won't fail to give us a reason to laugh at him ?? pic.twitter.com/RnpQlz1t0C

Lukaku left Man Utd for Inter Milan in the summer and some fans might now wish he had stayed after their poor start to the season.

Still, moments like this show that the Belgian was not the most reliable performer and has the odd horror miss in him.