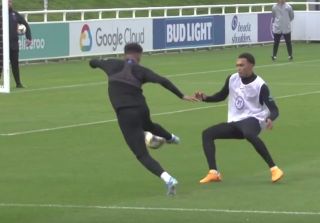 England released footage from one of their training sessions this week and it showed some of the exciting quality that they’ve got in the squad right now.

One of the battles which caught the eye was the one between Liverpool defender Trent Alexander-Arnold and Borussia Dortmund starlet Jadon Sancho.

As seen from around the 9-minute and 20 seconds mark, the pair square off in a brilliant battle of attack vs defence and it has to be said that the Reds defender wins it.

Aside from the fact that it’s great preparation for the upcoming games, it also gives an insight into Alexander-Arnold in particular, as he is clearly showing no let-up even in training as he’s hounding Sancho on the ball and roughing him up a little.

That will only help the youngster improve even more, while the same could be said for Alexander-Arnold going up against a player with so much quality and trickery on the ball.

They’ll be on the same side this week for England, but it would be fascinating to see them go head-to-head in the Champions League this season.

It must be a delight for one man in particular though, as Gareth Southgate has some great talent at his disposal in this current crop of players.