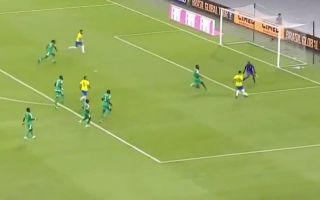 Brazil were in action against Senegal in an international friendly on Thursday and Liverpool striker Roberto Firmino opened the scoring for the Selecao.

Both sides put out strong line-ups as they evidently wanted to win, but it was Brazil who struck first through Firmino after just nine minutes.

SEE MORE: ‘Pressure might become too much’ – Rafa Benitez warning for Man City in title battle with Liverpool

As seen in the video below, the Liverpool forward produced a wonderfully cheeky finish to beat the goalkeeper from a tight angle, as he showed great composure and technical quality to get it right and break the deadlock.

He’s been crucial for Liverpool so far this season, and they’ll be delighted that he has continued his good form over the international break and will be full of confidence on his return.

Of course though, they’ll also be hoping that comes back without any fresh injury problems as the frontman remains a pivotal part of Jurgen Klopp’s side as they hope to continue their impressive start to the campaign after the international break concludes.

A naughty finish from Firmino ?#BRASEN

The @ManCity and @LFC forwards link up to fire Brazil into an early 1-0 lead against Senegal. pic.twitter.com/NMBP4rykIr